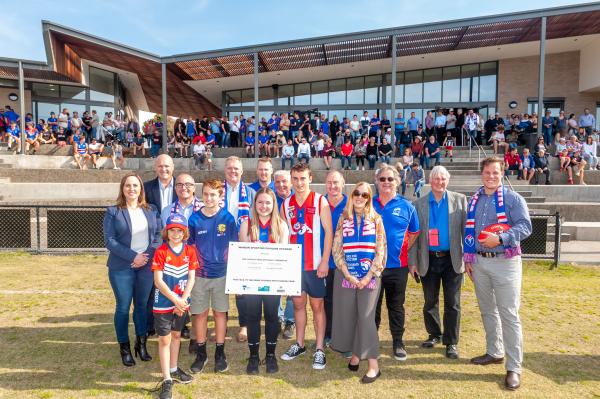 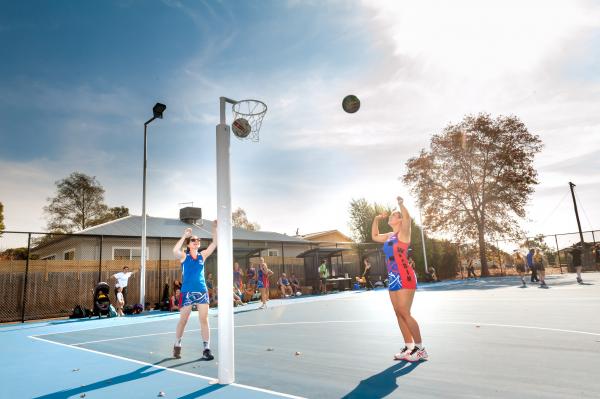 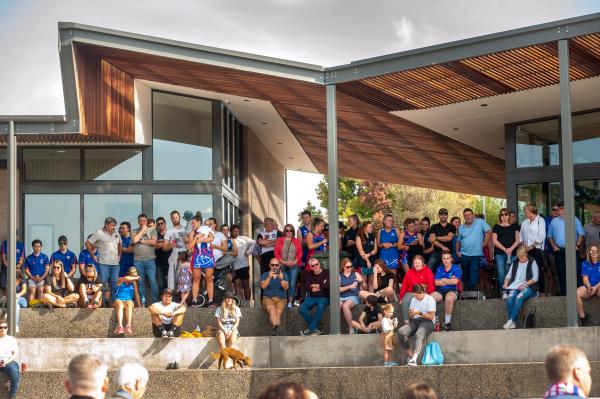 The Doggies have a new kennel down at Wandin as the club held celebrations to mark the opening of the new first class sporting facility on Saturday 1 May.

The project saw the demolition of the existing pavilion building and the construction of a new sporting pavilion that will optimise the use of the oval and provide a meeting and social space for the community as a whole.

“Not only for the Wandin Football Netball Club, but for the Wandin Community as a whole, for us to have a facility that, in my opinion, is unrivalled for the architectural design to the outcome and finished product, it’s an unbelievable outcome for the whole community.”

“The clubrooms were absolutely well overdue for renewal and this project has been conservatively 12 to 15 years in the making. Some of the changes that have happened mean we’ve gone from one individual building with half change rooms, half social club to now having fully functioning change rooms that are independent of a social room.”

Other changes include increased space in front of the pavilion to house what Mr Crossland described as “a hell of a lot more crowd” with a fully terraced space from the bottom of the south building to the top of the north building. New kitchen and bar facilities are welcomed changes as well as a full glass frontage view overlooking the ground.

“It gives an exceptional view of the playing surface,” Mr Crossland said.

Yarra Ranges Council Mayor Fiona McAllister said, “Having a quality place to meet, train and play is so important for community sports. In 2021, our pavilions and sporting facilities have to be accessible for everyone in the community – whether you’re playing, spectating or holding an event in this space – no matter what your ability or gender.

“This new pavilion is made for people of all genders and is fully compliant to Australian disability standards – something we’re ensuring across all our pavilion redevelopments across Yarra Ranges.

“The Wandin North Community Sporting Pavilion will be a permanent, modern home for sporting clubs in the area – a place where they can meet, train and grow into the future.

A big thank you to the club and to our state and federal counterparts for all providing funding towards this wonderful new pavilion.”

Casey MP Tony Smith praised the Wandin community for their dedication in helping fundraise the project.

“It was a fantastic day for the Wandin community. After many years of perseverance and passion, I was thrilled to share this special day with them,” he said.

“All three levels of government contributed much needed funds but none of it would have happened without the fundraising and the volunteering from the Wandin community. This new first class facility caters for male and female sport and will also serve as an important community hub in the Yarra Valley.”

The federal government also helped fund for new netball courts, which sit adjacent to the pavilion.

Mr Crossland paid thanks to the community and all three levels of government for lending their support, as well as to the Wandin/Seville Community Bank, which provided the largest contribution to a project the organisation has embarked upon.

“Two people in particular, from a club and community perspective, have driven this project for ten years. That’s Rob Bayliss, who is a life member. He’s been knocking down every door and when that door opened, he kept his foot inside there to get the outcome we needed.

“The other is Randall Pye, an architect and designer who had an ability to influence the project… He had been pushing some pretty unique and striking ideas.”

Wandin hosted Woori Yallock on the day. The Dogs’ reserves team enjoyed a 21 point win, while the seniors fell to the Tigers by 38 points.