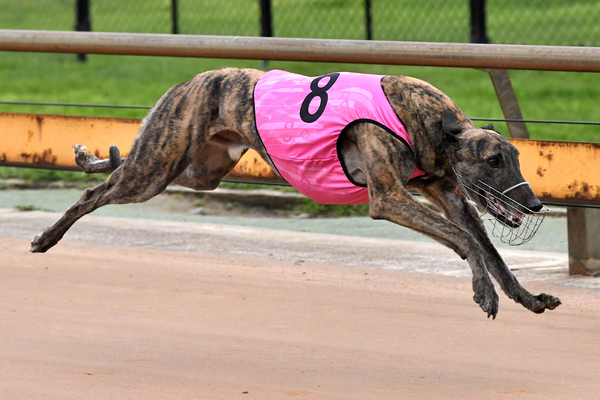 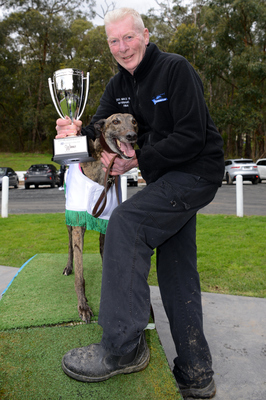 An ecstatic Anthony Azzopardi was full of praise for Myrniong And All after the ultra-consistent sprinter claimed a deserved feature race victory in Sunday afternoon’s Group 3 Healesville Cup. “He’s an unbelievable dog,” Azzopardi said. “He’s just a little ripper and I reckon he truly deserves this.” Myrniong And All had been knocking on the […]

An ecstatic Anthony Azzopardi was full of praise for Myrniong And All after the ultra-consistent sprinter claimed a deserved feature race victory in Sunday afternoon’s Group 3 Healesville Cup.

“He’s just a little ripper and I reckon he truly deserves this.”

Myrniong And All had been knocking on the door throughout the inaugural Healesville Cup Carnival.

The son of US sire KC And All was placed in the first-ever National Straight Track Championship and Victorian State Final, with Healesville specialist Peter Galo the victor on both occasions, while he also finished runner-up in his Healesville Cup heat.

While Azzopardi would have preferred an inside draw for the $47,000 to-the-winner 350 metre final on 8 September, Myrniong And All was the $4.10 second elect from eight, with rails runner Startron, prepared by Wayne Vassallo, the $3.20 favourite.

Myrniong And All started well and avoided trouble working his way over to the inside as he defeated Friday Frothies ($5.70) by 1.27 lengths in 19.01 seconds, turning the tables on Friday Frothies from their heat meeting one week earlier.

It was a welcome change of Healesville Cup fortune for Azzopardi, who watched Myrniong And All’s Cup triumph from home as he prepared to drive to NSW where Whiskey Riot will contest Monday’s heats of the Million Dollar Chase at Bulli.

“I nearly ripped the roof off my house,” Azzopardi said.

“I’m normally pretty quiet when I’m at the track but I get very excited at home.

“He needed to get out and run and he did.

“He did come across but he didn’t crash.

“He worked his way across and once he sees daylight he takes off.

“When he hurt himself at his last start at Horsham (on 4 June) my main goal was to get him right for the Healesville Cup.

“He was ready a bit sooner than I expected so we had a go at the Straight Track Championship first.

“Anything else is a bonus now.

“I’m not sure what we’ll do with him now but I’ve got a 16-hour return trip to have a think about it!”

In Azzopardi’s absence, Myrniong And All was handled by Neil Jones, with the former NSW trainer indebted to the assistance of Jones and his 21-year-old nephew Jacob Azzopardi.

“The dog might race in my name but this is their win too,” Azzopardi offered.

“Their passion for the dogs is unbelievable and I couldn’t be more appreciative of all the hard work they both do.”

While National Straight Track Championship hero Peter Galo was a shock casualty in the Healesville Cup heats, Garry Selkrig’s course record holder was a dominant winner of the Castle Of Mey Cup Consolation.

After finishing third to Friday Frothies and Myrniong And All in a loaded heat, Peter Galo started $1.50 favourite from box two in the Consolation and he bounced back to his brilliant best, clocking a best of day 18.91s.

24/01/2020
Melbourne Gun Club played host to an international clay target shooting event in Yering on the weekend of 4-5 January. The shoot was a memorial...

Young writer’s play on the way

Support for Victoria’s wildlife and biodiversity