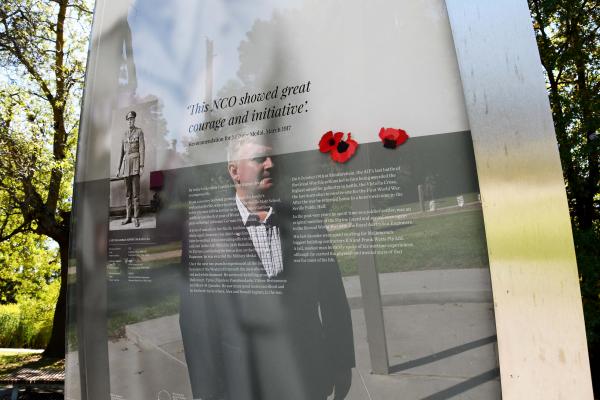 For nearly eight years the Seville community has worked to have a war memorial built in the township and this Anzac Day the remaining three glass panels of the Seville War Memorial project will finally be unveiled.

The project aimed to provide a commemorative site honouring Seville’s contribution to the national war effort and act as a public work of art.

The memorial will feature four glass panels, each standing four metres high, featuring the images of local servicemen and informative and emotive pieces detailing their stories.

In 2019, the first panel unveiled on Anzac Day dedicated to George Ingram, the Yarra Valley’s only Victoria Cross recipient.

Local historian and chair of the Seville War Memorial Committee Anthony McAleer OAM said Covid-19 had delayed the completion of the project.

“It feels fantastic to tell you the truth… It’s been a long drawn out process but in the end I can lay claim to what people told me wasn’t possible, was actually possible in the end,” he said.

“We’ve always had our eyes on the end goal because we knew this is something that’s going to be really special, not just for Seville but the entire Yarra Valley community.”

Mr McAleer wanted the Seville War Memorial to stand out amongst the many war memorials, not just in the Yarra Valley but across the nation.

“It’s not just a war memorial with names on it, but a public work of art and at the same time will educate people for generations to come. It’s full of personal stories and images, it certainly has a level of detail that very few war memorials actually have.”

The remaining three panels on the memorial are set to pay tribute to Bert Read, a soldier wounded at Gallipoli, George Cassidy, who enlisted in the war at just 16 and served in the 4th Australian Light Horse Regiment and Bruce Bethune, who died on active service in New Guinea during WWI.

George finished the letter to his family, stating: “I hope the next time I have energy enough to talk of this country, it will be in our own little dining room”.

“We purposely made it quite emotive,” Mr McAleer said. “This is something we want to carry on for generations to come. In 100 years people can read those stories and still be moved by them and what their experiences were.”

The memorial was funded by Yarra Ranges Council as well as both state and federal governments. Casey MP Tony Smith pledged $75,000 at the last election to see the completion of the project.

“The new Seville War Memorial is an important project for the town, the Yarra Valley and our nation,” Mr Smith said. “The memorial’s striking glass panels convey stories of heroism, service and sacrifice.

“The community’s determination to appropriately remember veterans from the Seville area is to be commended. The new memorial will be a notable feature of the town and for the Yarra Valley.”

A special ceremony will take place at 2pm on 25 April to commemorate Anzac Day and unveil the finished war memorial.