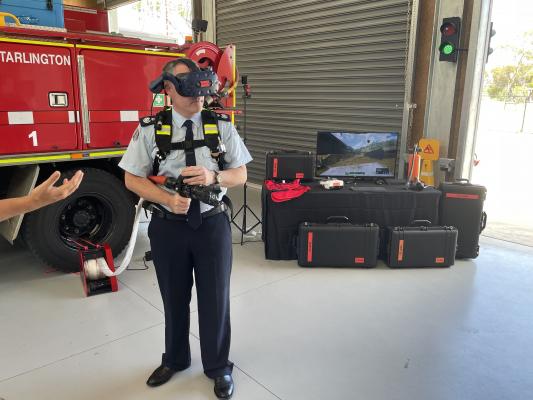 Over 30,000 volunteer firefighters will soon have access to the latest in virtual reality firefighting training, with the CFA expected […]

Over 30,000 volunteer firefighters will soon have access to the latest in virtual reality firefighting training, with the CFA expected to roll-out a tailored training package later this year.

“Accurate risk perception is the key to staying safe while fighting fires. It’s at the core of all firefighting,” he said.

“For the past 20 years, CFA has been at the forefront of computer-based learning for operational skills and improving people’s natural ability to perceive risks in the field.

“The initial concept came from our volunteers themselves – a way to give volunteers a ‘real life’ ability to assess their skills, without exposing them to danger.”

FLAIM Systems Chief Technology Officer and CFA volunteer James Mullins said the technology worked in a very similar way to a flight simulator for pilot training, but is designed specifically for firefighters.

“It combines virtual reality technology with real-life industry standard equipment, such as a fire nozzle, breathing apparatus, hose reel, and automated sense-perception devices such as a fire-proximity heat suit to simulate both the visual and sensory feelings of being in a fire,” he said.

“Alongside the virtual reality headset, it gives the volunteers an opportunity to participate in a growing library of different scenarios – from house fires and grass fires to aeroplane fires.”

Initially, CFA will purchase five FLAIM Trainer and 10 FLAIM Extinguisher systems which will be kept at its State Logistics Centre but used for training across the state once it is rolled out later this year.