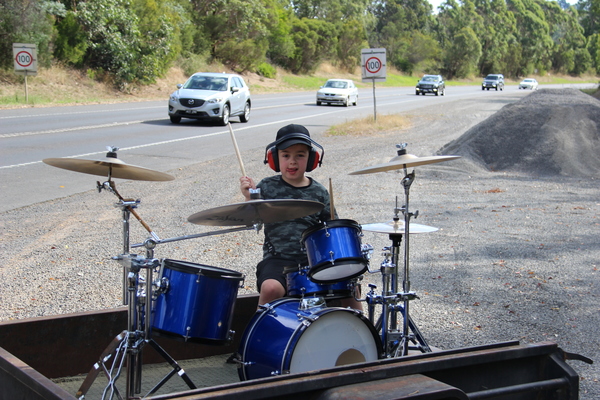 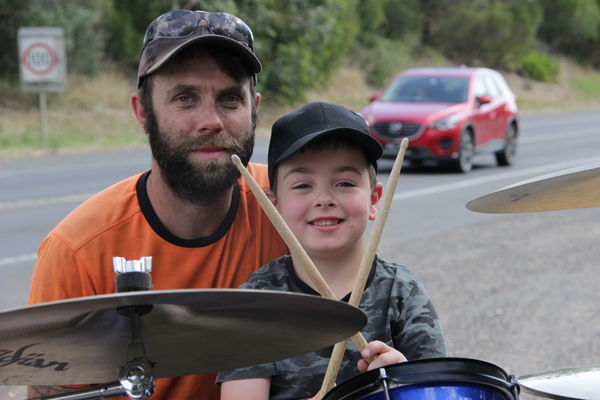 Keen-eyed locals commuting home along the Maroondah Highway outside Healesville have spotted Ryan drumming his heart out on the back of a trailer.

The sight of Ryan with his tongue poking out, intent on smashing away at his drum kit elicits many beeps from passing motorists, while others curiously pullover to grab a video or even offer him money.

But the sounds of the bustling highway and peak hour traffic go unnoticed to the drumming phenom, equipped with a pair of headphones.

Ryan’s dad, Jake Harris, told the Mail that he takes him out along the highway sometimes twice a week in order to get his drumming fix.

“People will drive past and will stop and go, ‘what the hell are you doing?’… It seems a bit strange, but I guess we’re just used to it now.”

The Harris family recently welcomed baby Lachie into the world, putting Ryan’s love for drumming in jeopardy in fears of disrupting the sleep of his five month old brother.

“If we couldn’t do this, we probably wouldn’t play. It would be too much of a disturbance. I know some people do anyway and they don’t care about their neighbours, but for us it really enables us to play and not stress about upsetting anyone.”

And when the pair does drum at home, they use mesh coverings to suppress the noise created by the instrument.

Ryan’s mum, Simonette Harris, said that her son is often mistaken as a busker by drivers pulling over offering to give him money. But they are quick to assure them that he’s just here to master his craft.

“It’s important that he’s not keeping him (Lachie) up all day. But it’s also important that Ryan continues to practice consistently, so we don’t want either of them to be disrupted,” she said.

Ryan loves to blast away to his own beat or will listen to music and follow along until he’s worn out. Mr Harris said that the highway is one of many locations he’ll take Ryan, another being tucked away in the Black Spur.

Mr Harris said his own passion for drumming was quickly taken up by Ryan from a young age.

“Ever since Ryzee (Ryan) was a little boy, from about nine months, he’d grab the sticks and sit on my lap and start playing a rhythm straight away.

“I bought him a little drum kit, but it’s just way too loud to play in the house. I myself use to go to out and do it.”

The family were surprised by the reactions from locals online after they had seen Ryan in action.

“What made me feel good is that it made others feel good. There were a couple comments from people about how they’d had a really crappy day at work and he’d come home and see Ryan playing and that it’d put him in the best mood for the rest of the night,” Ms Harris said.

Others commented that they had been inspired to share music with their own children.