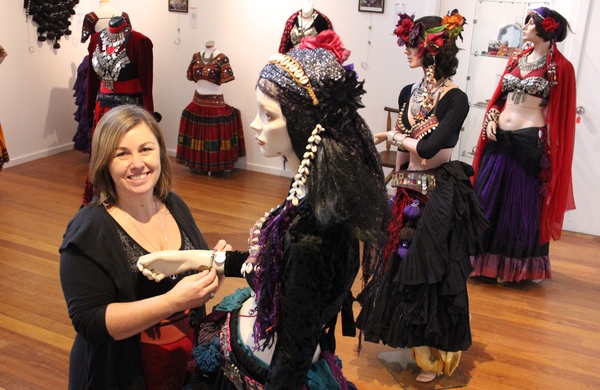 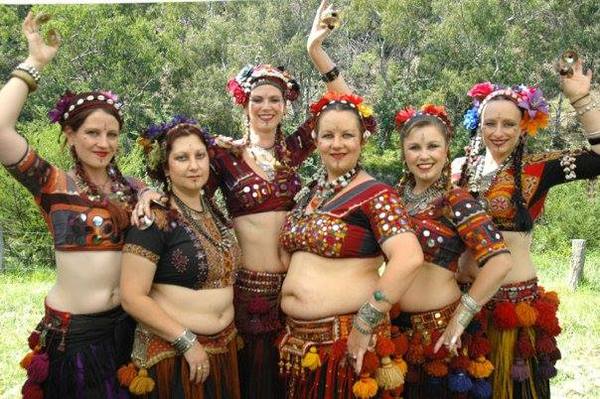 THE story behind the latest exhibition at the Waterwheel Gallery in Warburton is as rich and colourful as the exhibition itself.
“Gypsy Trails to Warburton” revisits Zaar Bellydance, a troupe of Upper Yarra women who embraced a tribal style of dance that has its roots in the Gypsy dance traditions of the Middle East with classical Indian, Flamenco and modern dance influences.
For around 15 years, the women, including Lindy Schneider who has worked with gallery co-ordinator Suyin Chan to curate the exhibition, were integral players in the cultural events of the region, and beyond.
Bringing the striking and exotic costumes into the light once again has been an emotional journey for Lindy who, as a new-comer to Warburton, was captivated by her first encounter with the troupe.
“I was standing in front of Earth Bazaar and watching Zade (Mackenzie), Bianca (Rich) and Ange (Flynn) and I was just so moved by seeing these amazing women,” she said.
She joined the troupe that also included Sophie Corbett and Karin Ricketts.
“The dance form appealed because it is about capturing the strength and beauty of the female form, and is something that is accessible to any woman,” Lindy said.
“Despite body shape or height, you can step into it and feel wonderful and strong.
“It wasn’t flighty … it has a strength about it, and a kind of mystique to it.”
The traditions behind the dance, the moves, music and language of the dance, are documented in the exhibition, providing a context beyond the stunning pieces and photographs on display.
Zaar Bellydance performed at local festivals and private functions as well as for charity events including Melbourne City Mission and Collingwood Children’s Farm.
A performance that lasted just a 20 or 30 minutes could take hours to prepare for – and that doesn’t take into account the countless hours spent making costumes, gathering fabric and the adornments that bring them to life.
All the costumes have been handmade by the women who have collected ancient textiles, coins, trinkets and artefacts from around the world to create unique pieces of art that reflect their individual personalities.
“We would make costumes together and there was almost a craft circle feel to it,” Lindy said as the finishing touches were put to the exhibition on Friday.
“Someone would find a piece of fabric and would be so excited to share it with the others.”
Changes in the women’s circumstances saw the Zaar Bellydance era come to an end, but the friendships have endured, and are celebrated in the exhibition with amazing photographs.
The exhibition at The Waterwheel Gallery in Warburton is on until 19 August.