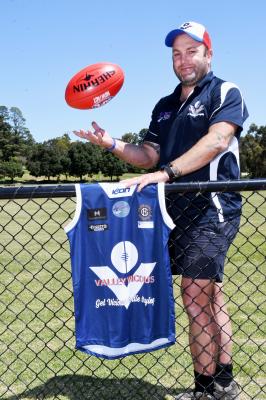 The Valley is once again going to get Vicious to raise awareness and funds to find a cure for Rett Syndrome.

On Saturday 27 February at the Healesville Football Ground, the Valley Vicious Rett Syndrome Awareness Cup is back for its third year with a big day of sport featuring many of the Valley and south-east’s great characters set to entertain fans.

But it’s all for one incredibly important cause.

Lee Lawrence – owner of the ever-popular ‘Valley Vicious Footy and Netball Banter’ Facebook page – wants to continue raising awareness and funds for the disease, which he began working hard on after his daughter, Gypsy was diagnosed with the devastating disease.

Rett Syndrome – a genetic brain disorder found almost exclusively in females and with a prevalence of one in about 15,000 females – leads to severe impairments in life, including a child’s ability to speak, walk and eat, and infants and children with the disorder gradually lose previously acquired abilities, such as the control of the hands.

He is hoping for another big day despite the ongoing concerns related to Covid-19, and despite the stresses of Victoria’s recent lockdown and the pandemic is raring to go.

“It’s changed quite a bit, we firstly had to think about whether we’d bother, or if its viable,” he said.

“It looks like we’ll get through, which is good.”

Lee said that Rett Syndrome and the ‘cruel’ nature of the disease continues to be the motivating factor for the highly-popular day on the sporting calendar, and he won’t stop until there is a cure.

“I just think about what we can do to find a cure for this cruel disorder, that’s all that really drives me,” he said.

“It’s about waking up to Gypsy every morning and seeing how she is, and trying to find a cure – and not just raising money, but raising awareness for Rett too.

“Three years ago, no one even knew about Rett Syndrome, and I feel like we’re really starting to get it out there and raising awareness for it.”

Lee also said that despite all of the challenges and hurdles in Gypsy’s life, she’s a remarkably upbeat and joyful girl.

“Gypsy is not in a wheelchair or anything yet, it will eventually happen but she’s a happy little girl for now.”

And with all of the focus now on finding a cure, Lee said that medical progress is being made every single day.

“They’re getting closer and closer each day (to finding a cure),” he said.

“They continually update us on trials and stuff like that, which is awesome and they’re positive they’ll find a cure.

“We don’t know if it’ll be in Gypsy’s time frame, but I reckon they will find a cure eventually.”

It’s set to be a massive day of local sporting action for one vitally important cause, with no shortage of footy and netball with some of the region’s most loved characters.

The action will begin from 12pm when gates open at the ground, and at 1pm Lee will have his Welcome to Rett Cup 3 speech, followed by the national anthem and Gypsy song.

At 1.20pm, the Ladies football match will commence, with a special appearance from band ‘Queen Works’ set to entertain the crowd at half-time.

At the conclusion of the match, there will be a Welcome to Rett Cup 3 speech by Tahil Lawrence, the Ladies football presentation followed by a Women’s sprint.

Following the match, the netball game will commence at 3.40pm, with a presentation to follow.

At 5pm, Lee will once again welcome the crowd, which will be followed by a traditional song, Welcome to Country and Smoking Ceremony, before the Men’s football match commences at 5.30pm.

At half-time and at the conclusion of this match, there will be a Super Boot competition, while at 8pm, band ‘Full Strength’ will play while a raffle will also be drawn.

It also will be the first time local football and netball fans can get a glimpse of community sport since the corresponding Rett Cup last year – before the pandemic meant that all community sport would be cancelled in 2020.

There will also be plenty of special guests alongside some of the favourite local identities, with ex-AFL stars Russell Robertson, Lindsay Gilbee, Brodie Holland and Kelvin Moore all locked in to play in the Men’s footy match.

Alongside all of the exciting sporting action, there will be food vans, kids amusements, live music and much more to entertain the crowd, which is capped at 5,000.

Tickets for adults will be $11, while it will be free for children under the age of 16.

Lee said it’s a brilliant opportunity for community sport starved fans to get back out to the local ground and come together as one for plenty of fun and laughs, but to continue the fight against Rett.

“No one has seen footy for a year, and we were really lucky to get away with a day last year,” he said.

“Luck’s been on our side again this year – it’s going to be a massive day for anyone who loves local footy to get down and see some of the characters running around, some are ex-AFL champions.

To purchase tickets, head to valleyviciousrettsyndromeawarenesscup3.intix.com