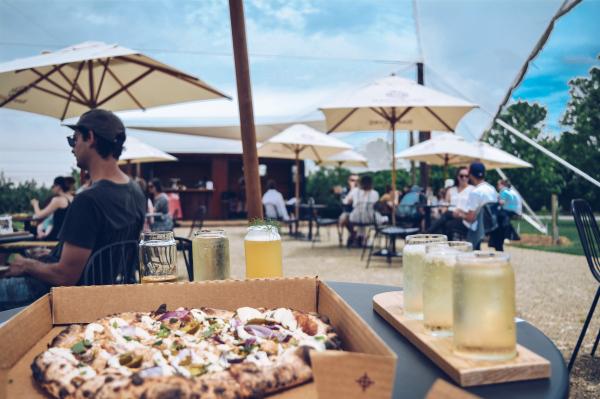 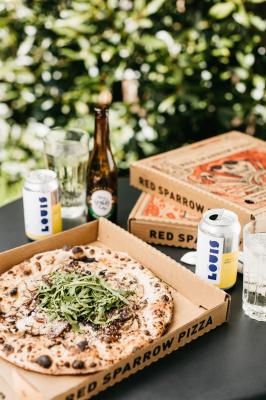 Napoleon Cider is teaming up with Melbourne’s only 100 per cent vegan pizzeria this summer at its apple orchard bar.

It’s expected to be the ultimate summer fling, with home grown cider and meat free pizzas blending together for a day under a sun umbrella.

The wood-fired pizzas are served directly to your table at the bar, smack bang in the lush surrounds of the Pink Lady apple orchards.

The cider makers wanted to launch the summer season with a bang and reached out to their mates Shelley and Michael from Red Sparrow Pizza, a vegan pizza business with three restaurants in Melbourne (Collingwood, Kensington and Prahran).

“Our ciders are naturally vegan-friendly, so it only made sense to call on Red Sparrow,” cider maker Tim Shand said.

“These guys do it properly, 48-hour fermented dough, hand-stretched bases and super clever, outrageously delicious toppings, the cheeseburger pizza is a game-changer”.

With Yarra Valley restaurants strapped with seating limits and bookings at a premium, the Orchard Bar team is offering a more relaxed summer lunch date with picnic rugs and dogs on leads are welcome.

The Bar’s casual outdoor setting and no reservation policy will make it an easy lunch option for tourists and locals alike.

The Orchard Bar was born from the lockdown, having just celebrated its first birthday.

Shand said, “We’ve always wanted to build a home for cider in the (Yarra) Valley, somewhere people could enjoy our ciders in the sunshine, in the thick of it”.

When Covid-19 was declared a pandemic in March last year, the team had just started construction on the retrofitted shipping container that now houses the bar. Like many businesses, the Napoleone’s kept pushing pause, finally opening the cider and cocktail bar six months later than planned in October 2020.

“It’s been a total whirlwind,” said Shand, “We even managed to squeeze a Cider Festival in between lockdowns. We’ve been tremendously lucky with timing”.

Shand’s team has also been itching to announce a new limited release cider – dubbed Pomme Rouge – for its rosy flush of colour, an apple cider, steeped on shiraz skins, sings of gin botanicals – an aperitivo style made for heady summer nights. It’s due to hit the taps at the Orchard Bar in mid December – the team will announce it via their social channels.

The Red Sparrow pizza pop-up will be at the Napoleone Orchard Bar each weekend over summer (barring public holidays) until February 27. Find out more at napoleone.com.au