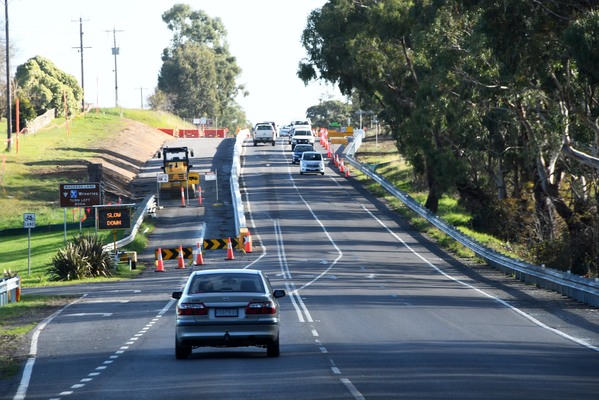 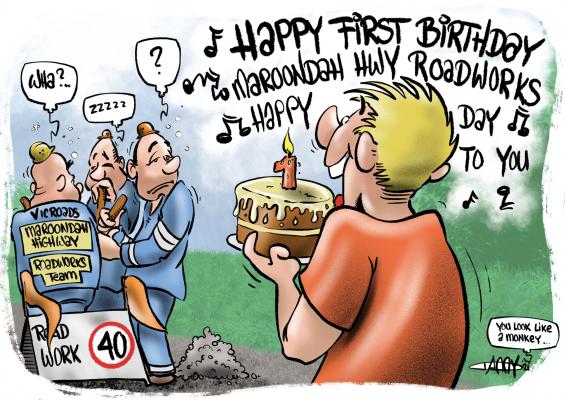 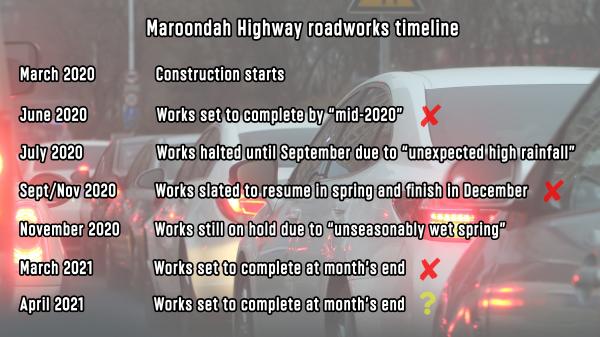 One year on from the beginning of construction of upgrades to the Maroondah Highway and works are still taking place on the road despite a predicted completion date of mid-2020.

The Maroondah Highway upgrades have been plagued with delays with poor weather conditions being blamed, while the State Government said additional upgrades were required after work had started on the project.

The Department of Transport’s acting director for safer roads, Leong Yew, apologised for the delays as the works neared completion.

“We’re upgrading this section of the Maroondah Highway to save lives and prevent serious injury… As the project was being delivered it became clear that additional road improvements were required to improve the quality of the road.

“We apologise for the inconvenience that delays resulting from additional safety works and weather delays has caused to all local residents and drivers as we deliver this important project.”

Monthly rainfall data in Coldstream highlighted the months of April, May, August and October to have significantly higher average rainfall, each month experiencing about 25 plus millimetres of rain, while the month of April experienced about 100 millimetres higher than the monthly average rainfall, according to the Bureau of Meteorology.

Mr Yew said nine kilometres of safety barriers had been installed and intersection improvements across four locations are almost complete. Works had been given an adjusted completion date of the end of March, but that is now set to be pushed back to the end of April.

The works between Stringybark Creek and Maxwells Road were delayed due to wet weather and a number of other construction challenges that required changes to the original scope and additional works, according to the Department of Transport.

Eildon MP Cindy McLeish has been vocal about the delays to construction along the road.

“Maroondah Highway roadworks have been an issue for over a year now,” she said. “People are so frustrated seeing roadworks continue elsewhere, not being informed and speculating as to why works have been delayed. It is time for the government to come clean and get the road completed.”

The roadworks came under fire from Coldstream CFA captain Sean Bethell in September last year. The brigade captain said he was frustrated to see the lowered speed limit.

“For the fire brigade, it’s going to make it harder for us to get around traffic at the slower limit of 80km/h. When traffic was doing 100km/h, our likelihood of catching up to the next group of traffic was lower.

“Now that you’re going slower, we’re more likely to be in an accident because you’re passing more traffic grouped together.”

At the time, the Department of Transport said the speed limit reduction increased journey times between Coldstream and Healesville by about 90 seconds.

Mr Bethell held concerns about roadside barriers installed close to the edge of the road. His preference would have been to see additional overtaking lanes as he feared the barriers would prevent emergency vehicles from attending roadside incidents without blocking the highway.

The Department said the new roadside barriers provide regular breaks, with no length of barrier running longer than one kilometre. These breaks include property access points allowing vehicles to pull over or for emergency services to access the roadside.

Roadworks started around March last year coinciding with the Covid-19 pandemic as the Department of Transport planned for a mid-2020 finish to the infrastructure upgrades. The project will bring a lowered speed limit of 80km/h from 100km/h and improved turning lanes between Healesville and Coldstream in the heart of the Yarra Valley’s wine region.

The Maroondah Highway between Coldstream and Healesville was identified as a high-risk route with 13 people being seriously injured and tragically three people losing their lives in crashes between July 2013 and December 2018, according to the Department of Transport.